The United States military establishment had a history of understanding the relationship between standardized uniforms with unit discipline and group esprit de corps.

However, it was not until the dawn of the 20th century that the army began to focus upon the relationship of uniforms with efficiency, comfort and reliability.

In the earliest efforts to match uniforms with climate conditions and modern technologies, the army introduced khaki in the Cuban invasion of 1898 (Spanish American War).

The Cuban war utilized smokeless powder in their hand weapons instead of the black smoke with the latter's obvious affect on lighter colored clothing.

Time to change either the uniform or the black smoke. The latter was the obvious choice for reasons other than the uniform.

Military planners deemed uniform color was significant,  and recognized the importance of blending with the background. Uniform camouflage would become a battlefield tactic.

Khaki became one of the army's staple colors along with olive drab. The jerkin pictured above was probably worn by a volunteer infantryman. The regular army did not provide branch colors over the pockets. However, the style was identical.

In 1902, a board was formed to review army uniforms.The result was General Order 81.

1.Blue was eliminated for the dress uniform.
2.Replacement with khaki cotton or olive drab wool.
3.Leather, where employed, was changed from black to russet.
4.New insignia was introduced.
5.Sleeve chevrons were smaller.
6.Gilt was used for dress buttons, and bronze for the field displaying the eagle.

Some of these changes were delayed by some quartermaster depots to enable utilization of existing, old stock for the artillery and engineer corps. However, these basic reforms were in place on April 6, 1917, when the United States entered the war.

The color of piping (trim) readily identified the branch of service. Services that had existed almost 200 years had a lock on their traditional colors.

The U.S.military was completely sold on the design of the British tunic. Much of the clothing manufactured for American soldiers was completed in England---and even in France.

Both the tunic and overcoat were similar for officers and enlisted men. And this applied to the winter wool and summer weight uniforms. Pockets, high collars and shoulder straps were identical for all  ranks.

The parameters for the war uniform were provided by the Regulations of 1908: the blue fatigue (work) uniform of blue denim and winter wool coat, double breasted and six buttons. The work uniform replaced the brown canvas material that had seen long service.  As the case with the tunic, the heavy wool garment was worn by all ranks. The only obvious difference would be the insignia displayed,and black band of the officer on the bottom of the sleeve. Old, visual divisions of class and rank were minimized.

Trousers were tapered and followed the olive drab appearance. Bound about the lower leg was the puttee which saw much service, This required wrapping the material as though it were a  bandage. The olive drab sweater and campaign hat completed most of the soldiers kit.

In 1917, the American Expeditionary Force (AEF) was issued the overseas hat. A simple cap that had a narrow, tapered crown that was standard issue through WWII. The steel helmet, almost identical to the British ally, was essential on the battlefield with exception of the method used to fasten the chin strap to the metal shell. This helmet was known to provide poor protection, but it was easily and rapidly produced to be supplied to millions of American recruits flooding training camps. 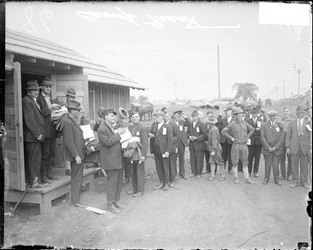 You will note (below) a machine gun detachment wearing both headgear: steel helmet and overseas cap, as it stood in formation, and ready for a French battlefield.

Two other items completed the American uniform. There were the boots and the essential gas mask. Mustard gas, a new weapon of mass destruction, permeated the air on many battlefields.

You will note in the company picture above that many of the men carried the bag hanging by a sling at their sides and worn by the Vickers machine gun squad below.

There were various types of boots issued.

Some had  had 48 eye holes for lacing.

Russet brown boots were worn with canvass leggings winter and summer. Russet was also the color for belts.

Black shoes were worn with dress uniforms including tropical wear. However, issue of dress uniforms were suspended and deemed impracticable because of the millions under arms.

The United States had established itself as a world power in 1898 when it defeated Spain.The country in 1917 was operating a diverse and extensive military establishment. The following table of insignia courtesy of  ancestor .com is illustrative of the complexity of the army in 1917. 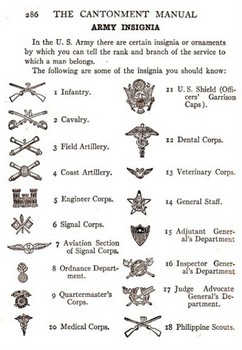 While the army was undergoing a major uniform makeover, the United States Navy barely changed a stitch. This is not to say that the navy was failing to grow its fighting capacity. Building new armored ships and big guns introduced the United States as a two ocean power.

The material would differ between their work uniforms and their duty uniforms, and would change with the introduction of newer cloth. However, cut and style remained static. The difference between the enlisted man's uniform and  his officer was significant.

The standard blouse was known as a jumper. Summer uniform was all white and pants for both uniforms were bell bottom falling to the top of the shoe. 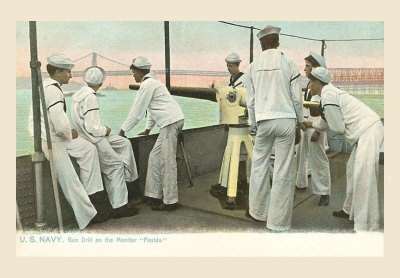 The spiked helmet (Pickelhaube) was gradually replaced by the steel pot (above). 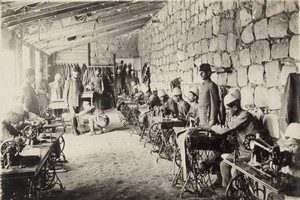 Turkish tailors produced uniforms for its Ottoman army in Palestine