Korean War Memorial
the National Mall in the nation's capital. 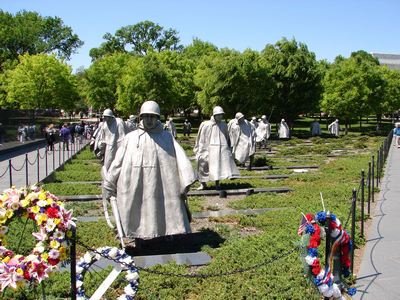 "Haunting, solemn and humbling". These writer's words describe an element of the memorial that profoundly affects the viewer. The tranquility of the park is in marked contrast to the time that our honored men and women served in the cauldron of war. They, and the other Americans whose  monuments dot the scene, have earned the serenity that descends on this park.

In 1986, the Congress directed the American Battle Monuments Commission to design a monument that would honor the sacrifice of our service people in the Korean War. Over  one and one-half million served in theater: 33,000 died, 128,000 wounded and almost 5,000 were missing and unaccounted.

They selected architects, Cooper-Lecky and the American sculptor, Frank Gaylord. This artist served in World War 2 in the 17th airborne. His combat service was in Africa, Europe and the Middle East. Wounded in action, he was awarded the bronze star.

The final Gaylord design portrays 19  soldiers formed in stainless steel depicting  squads on patrol. The steel is sharply distinguished from the hallowed monuments of marble and granite that dot the park.  Each branch of service is represented by a figure over 7 feet in height. The monument is set in a walled triangle. That site is graced with a  164 foot, granite side wall depicting persons  involved in the war.

To the north of the triangle is a granite wall bearing the names of the 22 countries whose men served in Korea. On one side you will find three Rose of Sharon bushes, the national flower of South Korea.

The visitor will find the startling Pool of Remembrance. Its tranquility does justice to the soldiers killed, wounded or missing in action. A plaque reads:

"Our nation honors her sons and daughters who answered the call to defend a country they never knew and a people they never met."

Sixty years after the last shots were fired, 7,900 soldiers are still unaccounted. Current technology may help close that gap. 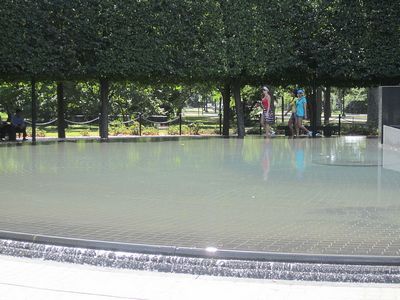 A common thread among servicemen is their reticence to recount their sacrifices and acts of heroism. Their families are completely unaware of their war time deeds. Unfortunately, evidence is uncovered after death when the effects of the deceased are marshaled. That is when medals and citations come to light which were only awarded for acts of great courage performed under the most extreme circumstances. In those instances, the medals awarded to the army recipient are the Bronze Star, Silver Star and medal Congressional Medal of Honor.

This Silver Star citation for actions in Korea speaks for itself and fittingly enjoys the pride of place in this tribute to the heroes of the Korean War. 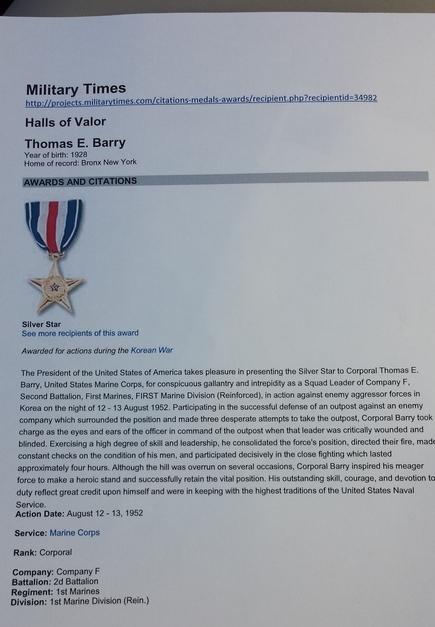