This pictorial history, with commentary, records events that dramatically or incrementally changed the world. These photographs are chronological and historical data points that shattered twenty-one years of world peace.

The war touched every continent and ocean of the globe. World War 2 destroyed many of the alliances that had fought together in the "Great War" (1914-1918) under the German flag or beneath  Allied banners.

Reversal of alliances produced contrary roles with unintended consequences-- e.g. major players: Italy and Japan; vacillating player: Russia (Soviet Union); minor player: Romania and many other lesser participants. The "Axis" countries were now global and matched the dimension of the nations that comprised the "Allies".

In March 1938, Adolph Hitler's Nazi Germany annexed (anschluss) neighboring Austria and was welcomed by its population. Less receptive was neighboring Czechoslovakia, but too weak to offer resistance to a German invasion (March 16, 1939). That country was abandoned by Great Britain and France who believed that Hitler's appetite was satisfied with this conquest. Prime Minister Neville Chamberlain sold that message to the English people in a moment of wishful thinking. Thus it is fitting to begin a photo tour of World War 2 with this honorable gentleman who henceforth was known for his injudicious policy of appeasement.

This new war was cruel and its human toll was upwards of sixty million deaths. Many of the photos below reflect the horror of World War 2 and were gathered by news organizations and culled from the official archives of the Allies. The effort was appropriately memorialized by the Veterans of Foreign Wars of the United States as a tribute to those who served. The photos displayed were gathered and published at wars end by this veterans organization, and we are appreciative their remarkable efforts.

On any one day of the war, headline news stories and their accompanying photos fought each other for space. The viewer will note numbers of diverse photos occur on the same date and in different parts of the world. Owing to the volume of photographs, the format has been divided by date into several parts as provided in the Contents Box. 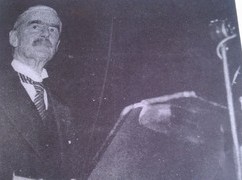 On the same day, Londoners responded to the air raid sirens. 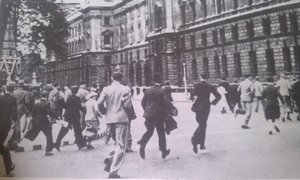 ,Concluding this eventful day, the British liner, Athenia, was sunk by a U-boat.
112 of the 1000 passengers did not survive. 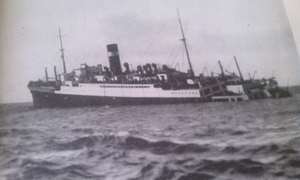 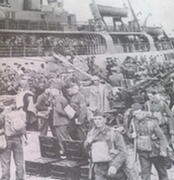 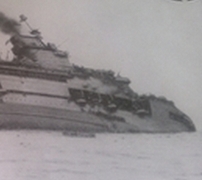 September 27:  Poland fell to German tanks and planes and divided Poland with Russia by secret provisions in the Molotov-Ribbentrop Treaty. 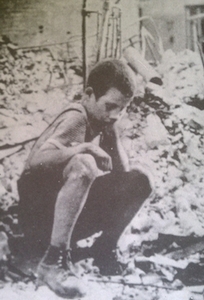 October: French Patrols on Western Front in Belgium  and search for Germans. 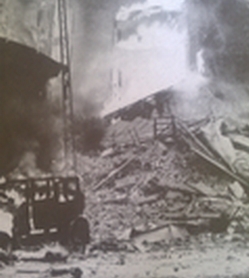 December 17: British fleet trapped the heavy cruiser Graf Spee on Uruguay river and Germans forced to scuttle one of their great ships. 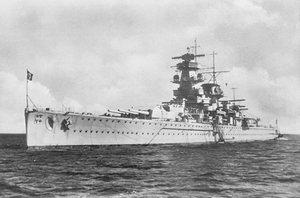 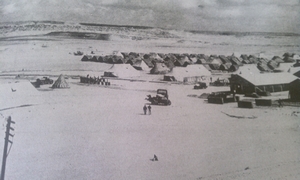 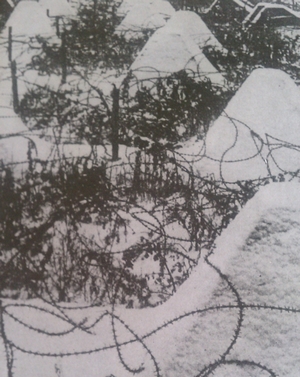 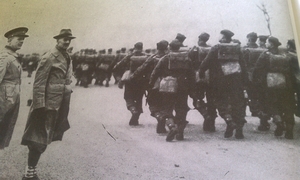 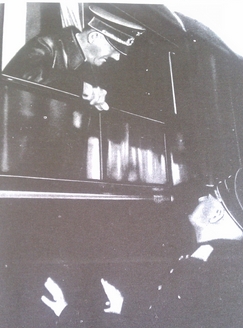 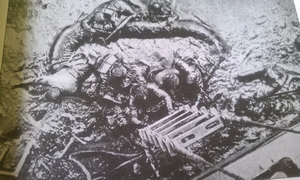 Winston Churchill promised Allied aid for Norway "to the best of their ability" and bombs German positions in Bergen. 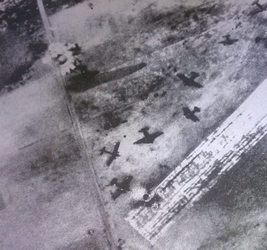 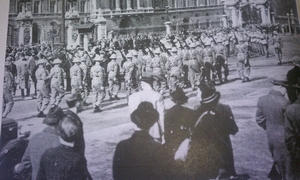 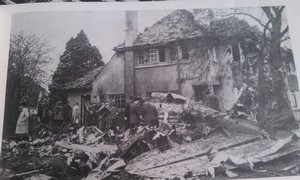 May 10: German blitzkrieg begins in Low Countries. Parachutists in vanguard land in Holland and overcome Dutch resistance in five days 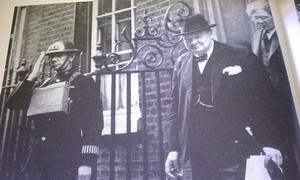 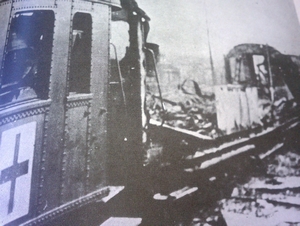 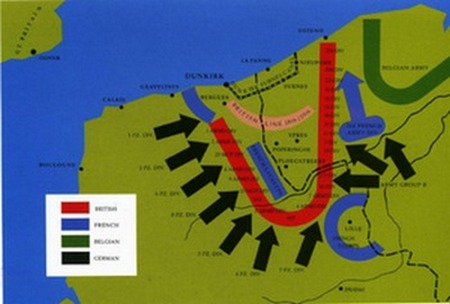 June 3: British and French troops evacuated by a flotilla of British ships, Royal Navy and privately owned vessels, big and small, while under German air attack and defended by Royal Air Force (R.A.F.)

PM Churchill: "--decisively defeated the main strength of the German Air Force and inflicted a loss of nearly four to one".

June3- 5:   Paris bombed and 500,000 German infantrymen follow a line of their tanks and drive on Paris.

June 10: Italy declares war on Great Britain and France. President Roosevelt responds: "stab in the back" 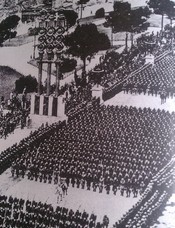 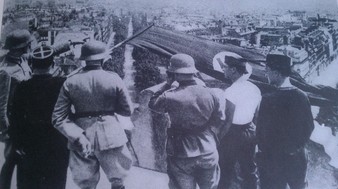 June 18: As France topples, the last British soldiers, not trapped in Dunkirk, hurriedly embark at Cherbourg. It will be precisely four years before the B.E.F. returns in the "D" day invasion allied with the United States. 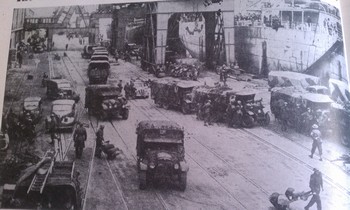 June 21: Hitler demands that the French surrender in the same train coach and location that Germany surrendered in World War 1 (November 11, 1918). The insult to French honor is complete. 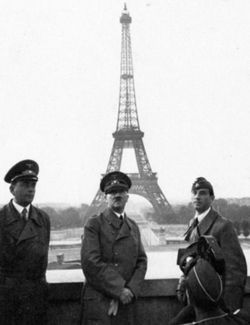 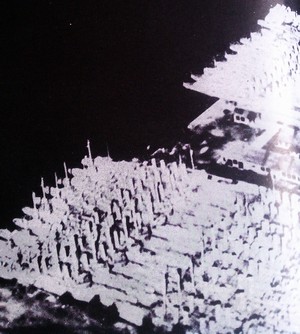 August 6: Britain aided by Somaliland Camel Corp to fight Italian invaders, but forced to abandon the country, on the African Horn, to the Italians two weeks later. 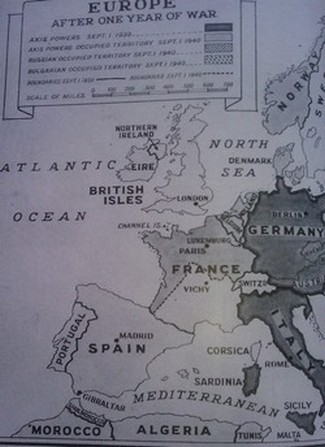 September 13: Italy invaded Egypt and repulsed by December11, by joint operations of British and its Dominion forces: Indian and Anzac(Australia/New Zealand)

Italians - - from invaders to prisoners 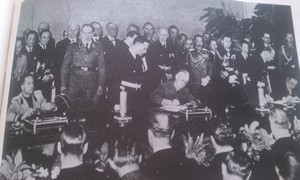 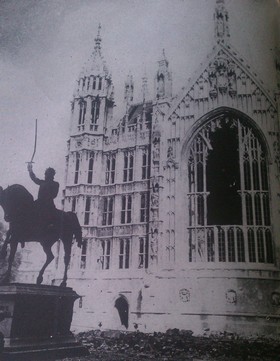 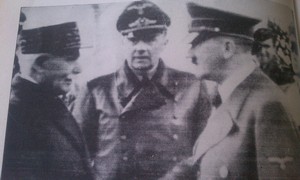 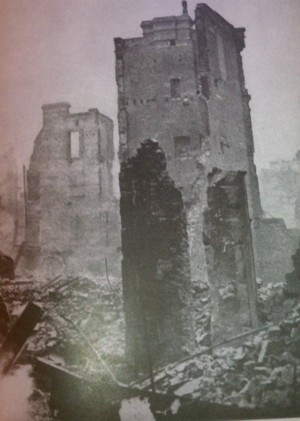